*Rock Wall Rental Near Me 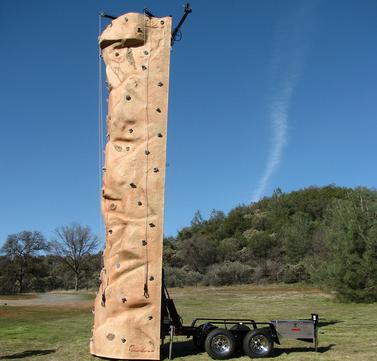 ​Images are for display purposes only.
Equipment may not be exactly as it appears on our website.
Pricing subject to change without notice.
Content copyright 2021. Partytime Inflatable.

Is your Chattanooga Rock Wall Rental safe?
Our rock wall is extremely safe!  Our Rock Climbing Wall has a full hydraulic system which gently lowers the climber down from whatever point they are on the climbing wall.  There is no way they can fall.  Unlike some rock walls which have a person on the ground holding a rope which is tied to the climber and that person is literally holding the climber from falling, our Rock Wall does NOT rely on the strength of a person being able to control the climber, but on a system that is completely safe!

How many people can be on the climbing wall at the same time?
Our Climbing Wall has 3 stations so 3 people can be on the rockwall at the same time.  Each side of our rockwall is designed a little bit different which allows for levels from easy for the newbie rock climbers, to medium for those climbers ready to step up a level (even little kids can do this side), to hard for climbers ready for a bigger challenge, to insane! for the advanced climber.  We also have lots of extra belts, so we can get the next person in line ready while others are climbing.  This saves a lot of time and more people get more turns!

Can anyone climb on the Chattanooga Rock Wall Rental?
Because our Rock Wall has different levels of difficulty, anyone can climb as long as they are between 20 and 235 lbs.  We even have toddlers that want to try, so we help them climb up a little either by guiding their feet or giving them a little boost.  I think they really like the ride down the most though, because with the hydraulic system, they feel like they are floating down to the ground.

Where can I set up the Chattanooga Rock Climbing Wall?
The Rock Wall is on a trailer and is in the down position when it is being transported.  We pull the Rock Wall with a truck and have to be able to drive it to the location where it is going to be set up.  We need at least 10' clearance to drive under and keep in mind that the trailer is 28' long + the length of the truck.  We can set the Rock Climbing Wall up on grass or concrete but we need a fairly level surface.  Of course the Rock Wall is 24' high when it is up, so we need clearance for that as well. 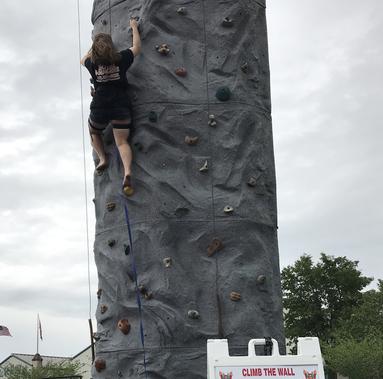